Often I wish I could carry a video camera around with me everywhere because there are so many things I wish you could see! I compose dozens of blog posts in my head as I'm walking from place to place because this city is unimaginably diverse. A bright orange Lamborghini parked across the street from a woman selling eggs ~ a dozen for about 87 cents. A man in his 30s wearing a yellow t-shirt emblazoned with "Hug and Kiss" next to a woman in a black business suit and high heels. I will try to be more thorough in documenting this city and our impressions of living here. 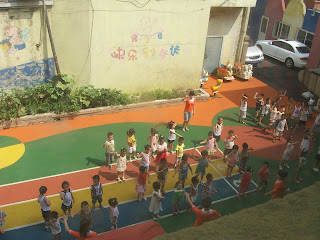 Today I captured one event I've wanted to video for weeks: Preschool Recess. Every morning at 10, the preschoolers go out to the playground. But it's not an ordinary recess like typical American preschool. Yes, there are slides and "big toys" to climb on and enjoy, but at this particular time of day, the kids line up in rows to do a choreographed dance for exercise.

The kids love it! Molly has long declared it her favorite time of the day, and she tries her best to sing the songs and do the motions as home. I think this has helped Hudson enjoy it more because lately I've noticed him participating quite well with his class.
You can find Molly and Hudson, right? :)  They are both in the middle of their classes; Molly is wearing a light green shirt and Hudson is wearing navy blue with khaki shorts.
The recess time allows me a 20 minute break from teaching English lessons ~ the 3 oldest classes before and the 2 youngest after. Like the kids, it's my favorite time of day!
~Dayna

Email ThisBlogThis!Share to TwitterShare to FacebookShare to Pinterest
Labels: preschool 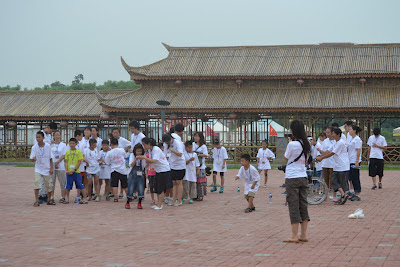 The family retreat was amazing! Partnering with Joni and Friends International, the Averys and other local team members were able to bless 31 children with disabilities and their families. In all, about 150 people were part of the retreat. The above photo shows the children playing outside, which is a rare treat in our city of 7 million people. We chose this hotel largely because of the ample playing area for the children.

Prior to the arrival of the families, I helped emcee for the volunteer training. I was also able to share my story about Multiple Sclerosis -- the pain and fear involved during the time of diagnosis as well as the freedom that later came from my healing.


When the families arrived, they were greeted by flags and cheers. Each child and family were able to meet their assigned volunteer for the retreat, and the children were given special bags. The bags were made by GAs (Girls in Action) from Texas. 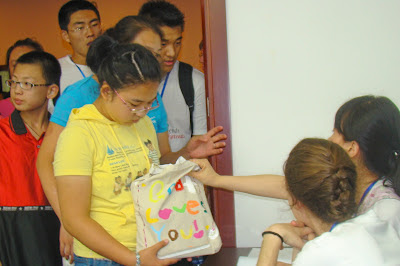 Dayna, Molly and Hudson arrived with the families. I was very glad they could come for a day ... as well as the other 145 people at the retreat. Wherever they go, the kids are very popular. Almost daily, numerous strangers take their pictures. One reason for this popularity (as explained by friends) is that the dolls children play with here in China are all Caucasian, looking a lot like Molly. Most Chinese think Molly and Hudson look like living, breathing dolls. Also, they can look like twins. 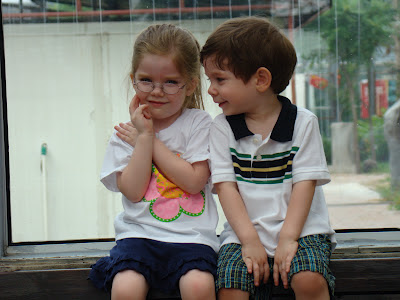 But the most important reason why it was great for the kids to be able to come to the retreat relates to the friends they could meet -- friends affected by disability. We want our kids to grow up loving people for who they are, not by what society says about them. In fact, we hope they will one day serve as catalysts to improve the lives of the less fortunate. 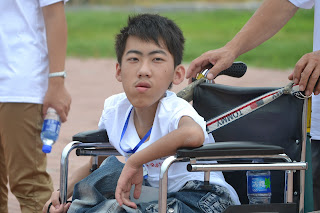 The above photo is of our friend Teddy. This was actually his third retreat, since he is a foster child of our organization's head director. The other 30 children all came for the first time. 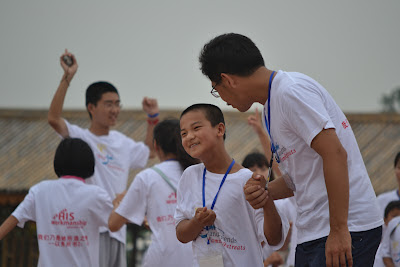 This photo focuses on a thirteen-year-old boy with Cerebral Palsy and his volunteer. The boy's mother was the one who asked me, "Would you start a school for my son?" We are looking into how to help.
~Kevin