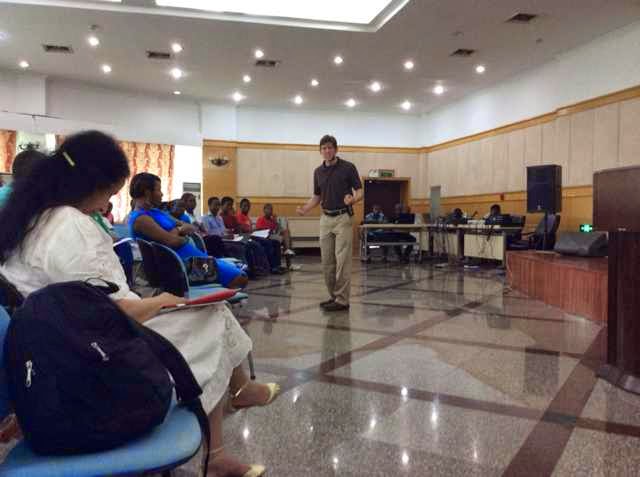 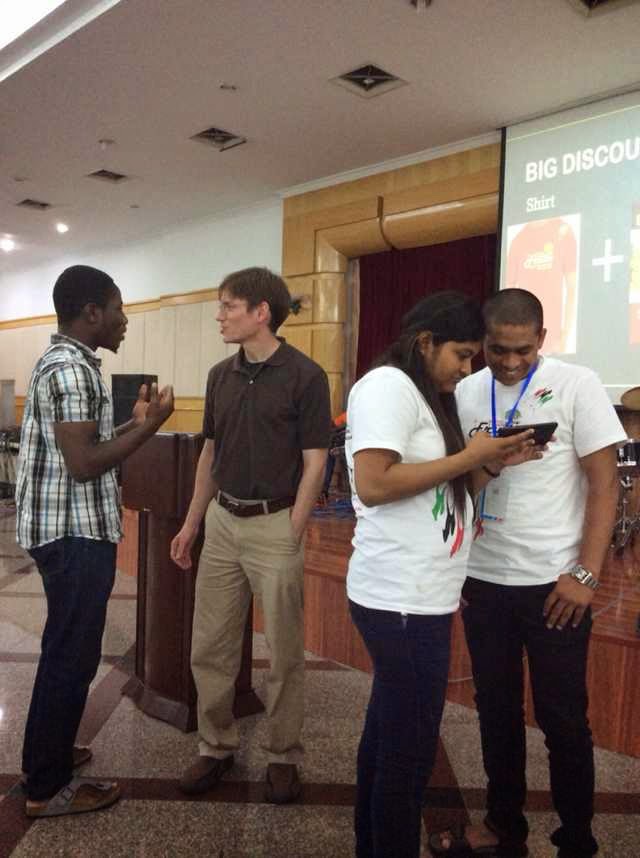 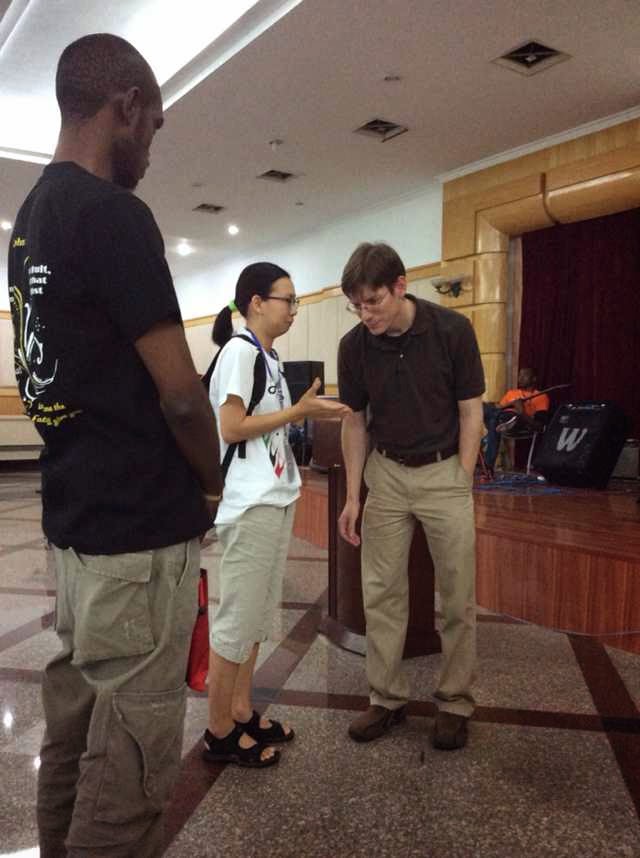 A day after returning from the Family Retreat, I (Kevin) had the opportunity to visit the Sunshine school. This program serves about 16 individuals with mental disabilities. The students learn basic living skills, and they enjoy friendships as they cook, make crafts and perform. 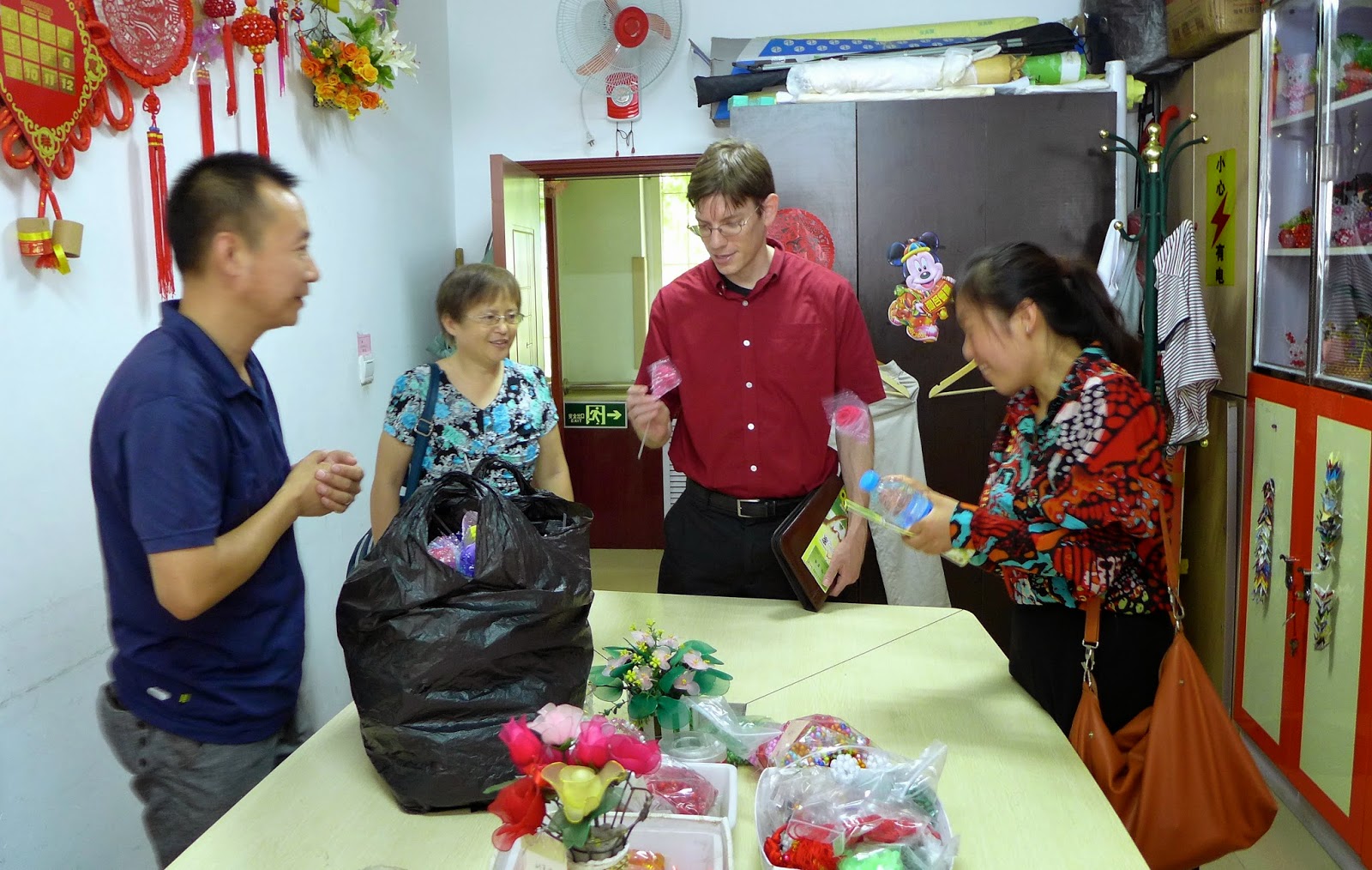 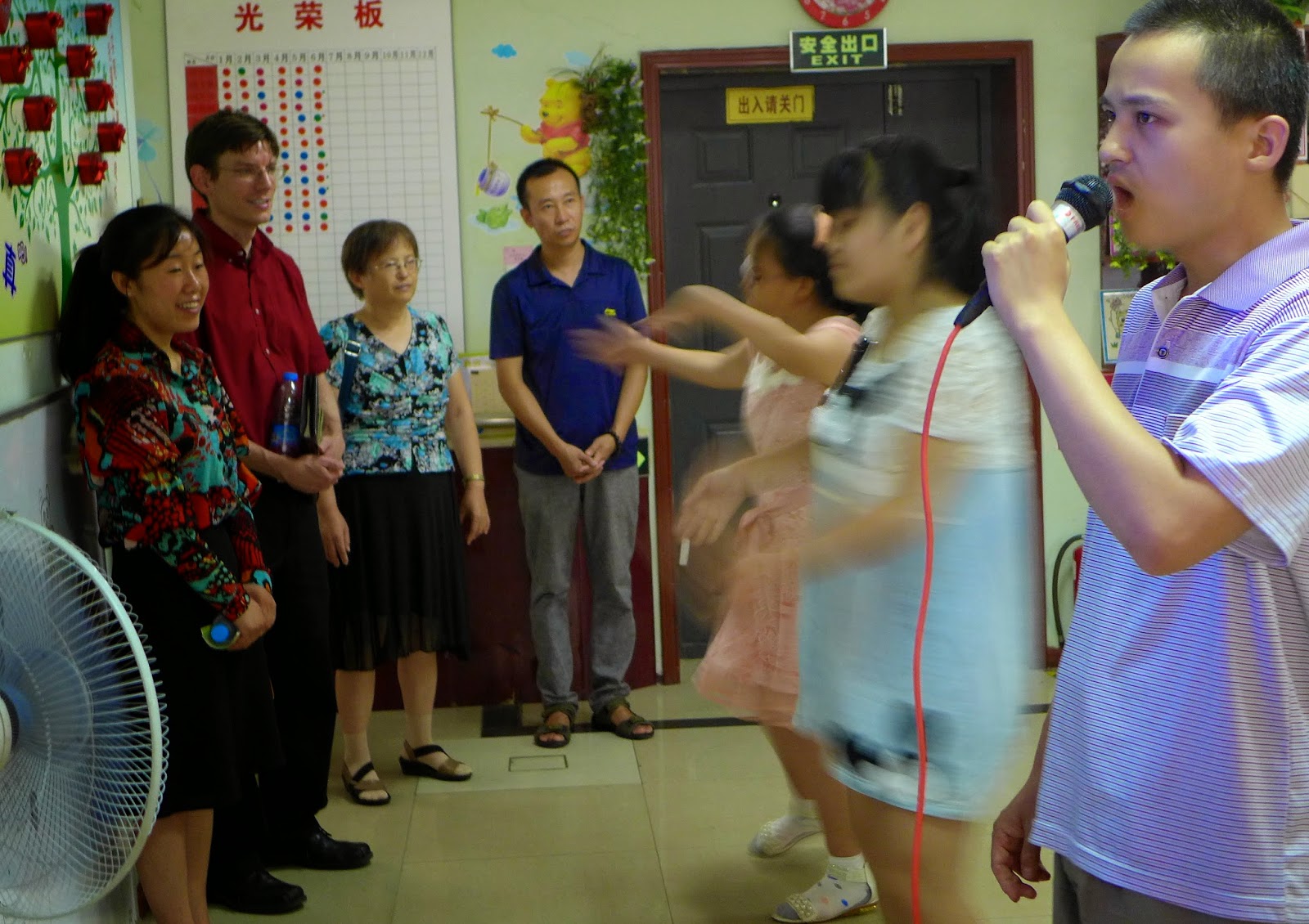 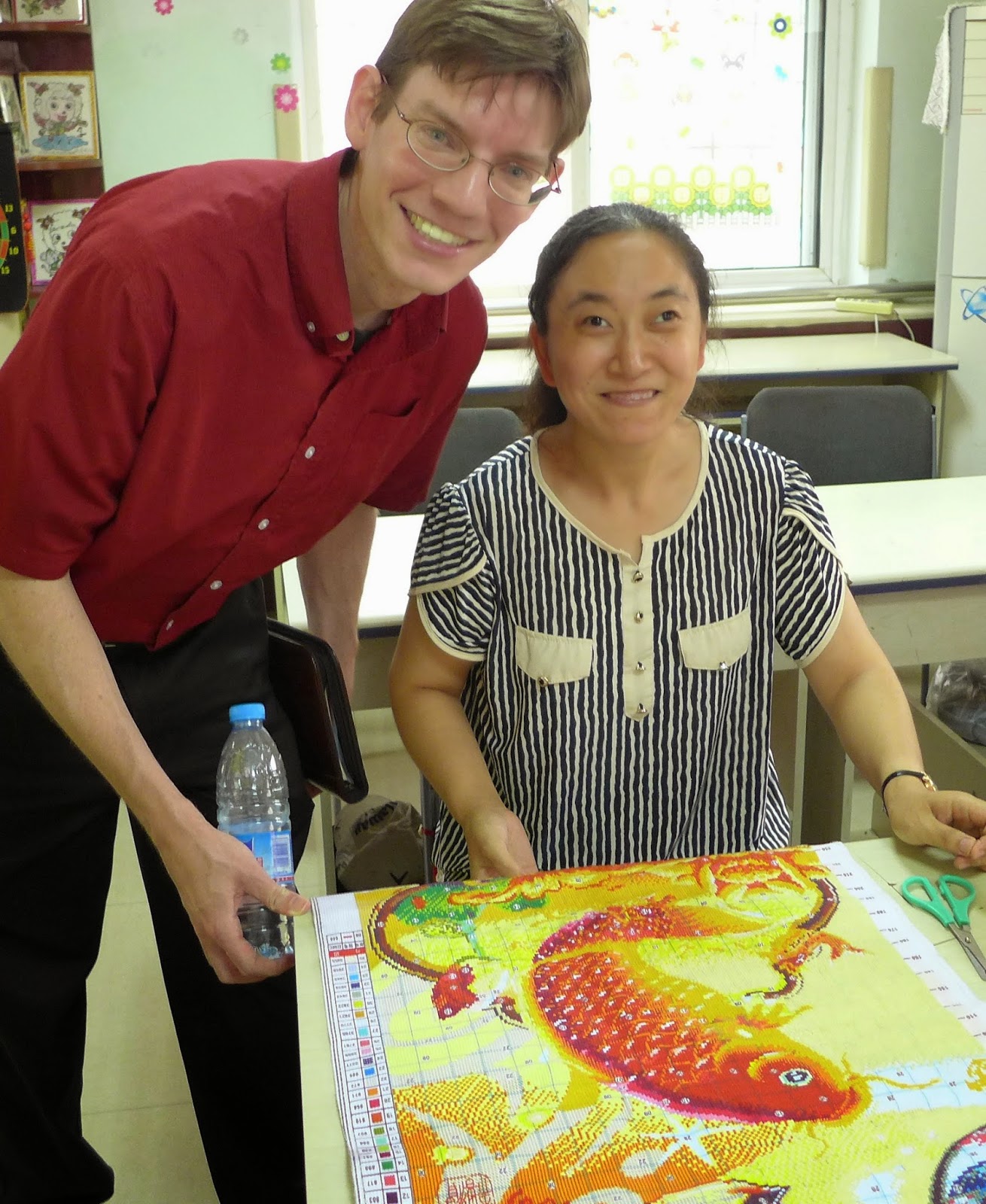 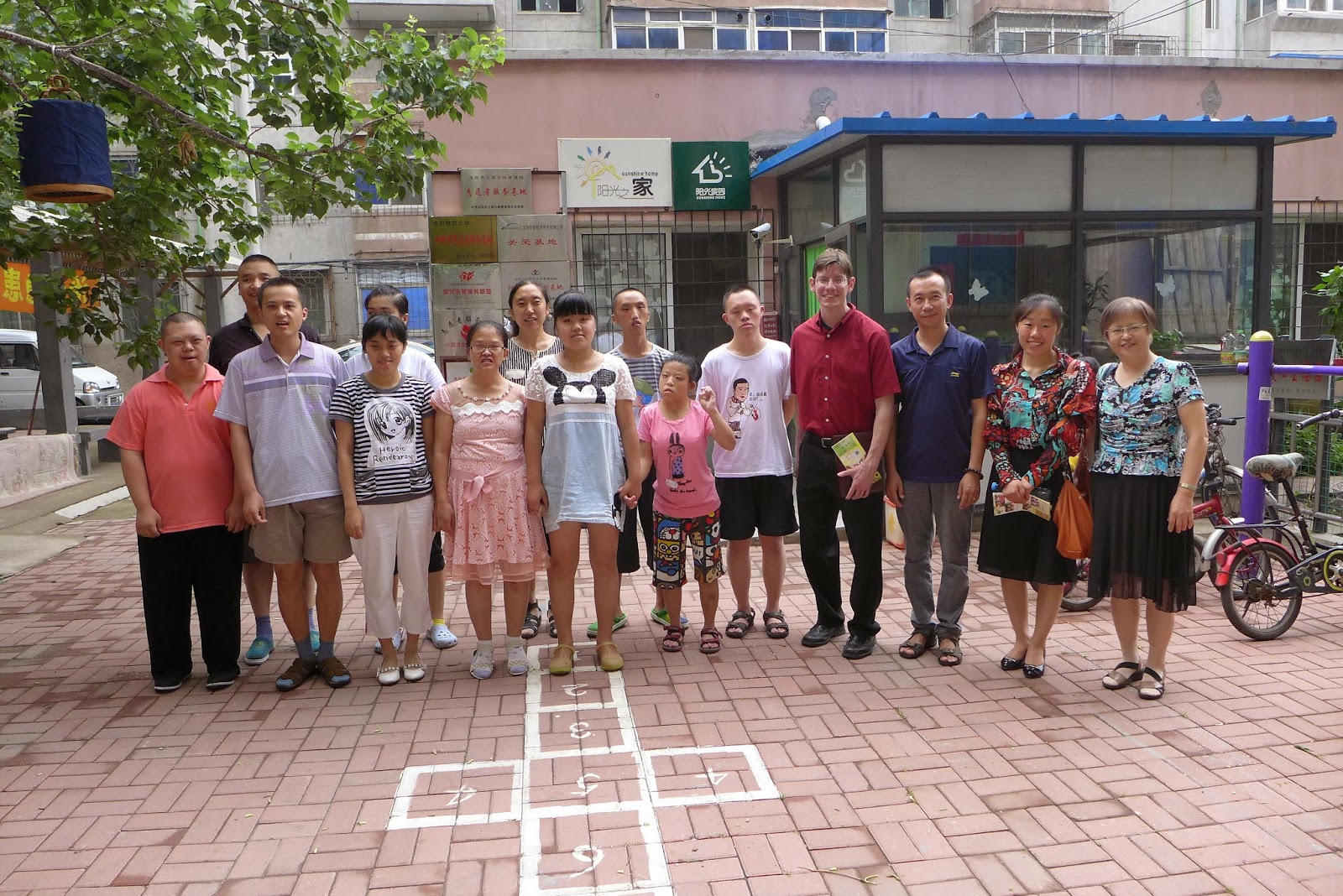 No matter the opportunity, it's always such a privilege to work with people affected by disabilities.
~ Kevin

Our retreat for 29 children with disabilities and their parents (and grandparents) concluded yesterday, and we are still catching our breath from the weekend. What a whirlwind of fun activities, meaningful discussions and educational opportunities for all of us.

Kevin, our organization's staff, volunteers and the Joni and Friends International team from California headed to the hotel Thursday morning for training and team bonding. They had a short commissioning ceremony where they poured water on everyone's hands as a way of blessing them to serve in the days to come. 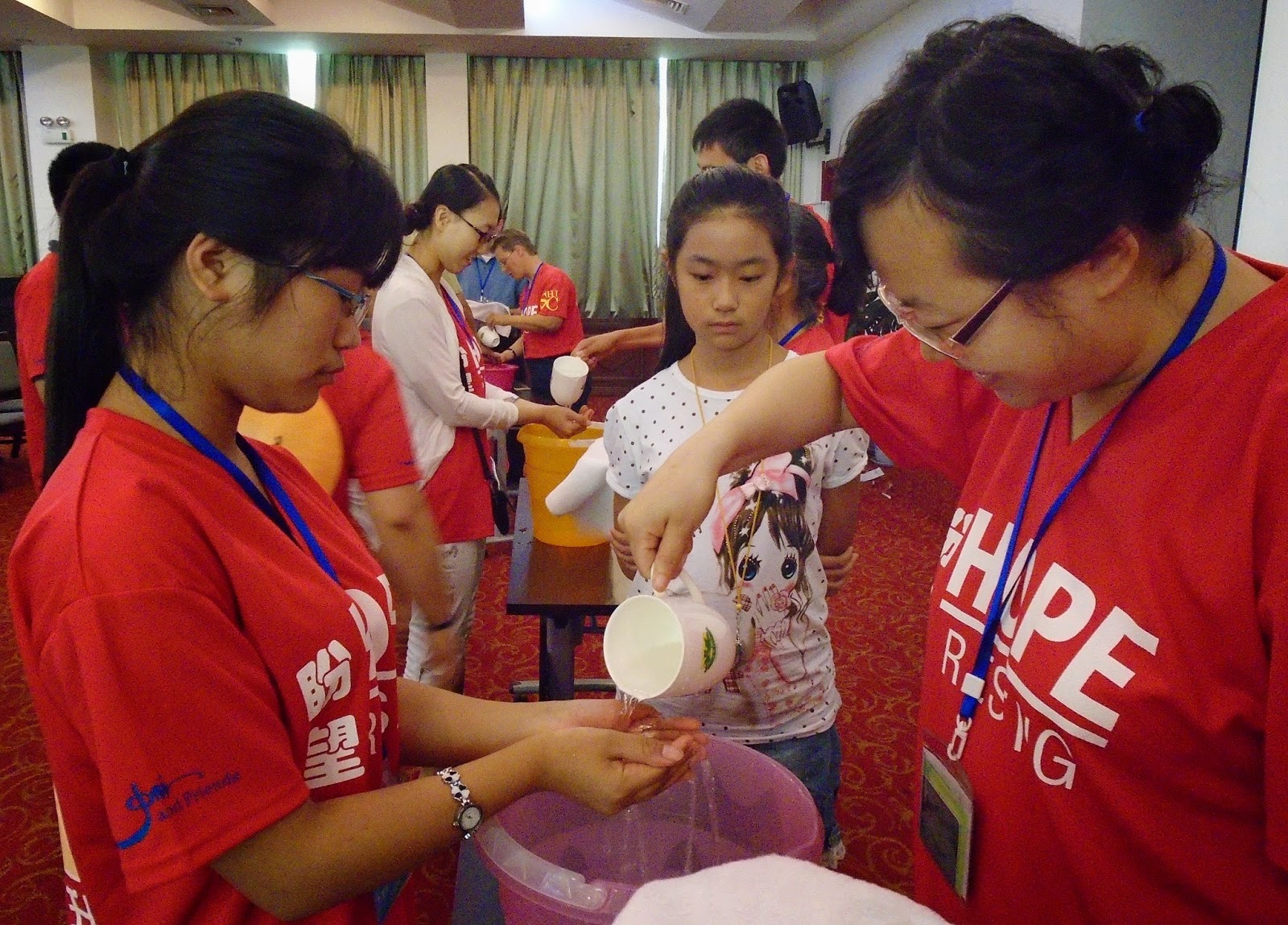 The kids and I rode on the bus with all the families on Friday morning. When the busses arrived at the hotel, all the volunteers were lined up in their matching shirts, cheering and waving personalized signs for each attendee. Molly and Hudson were completely overwhelmed! 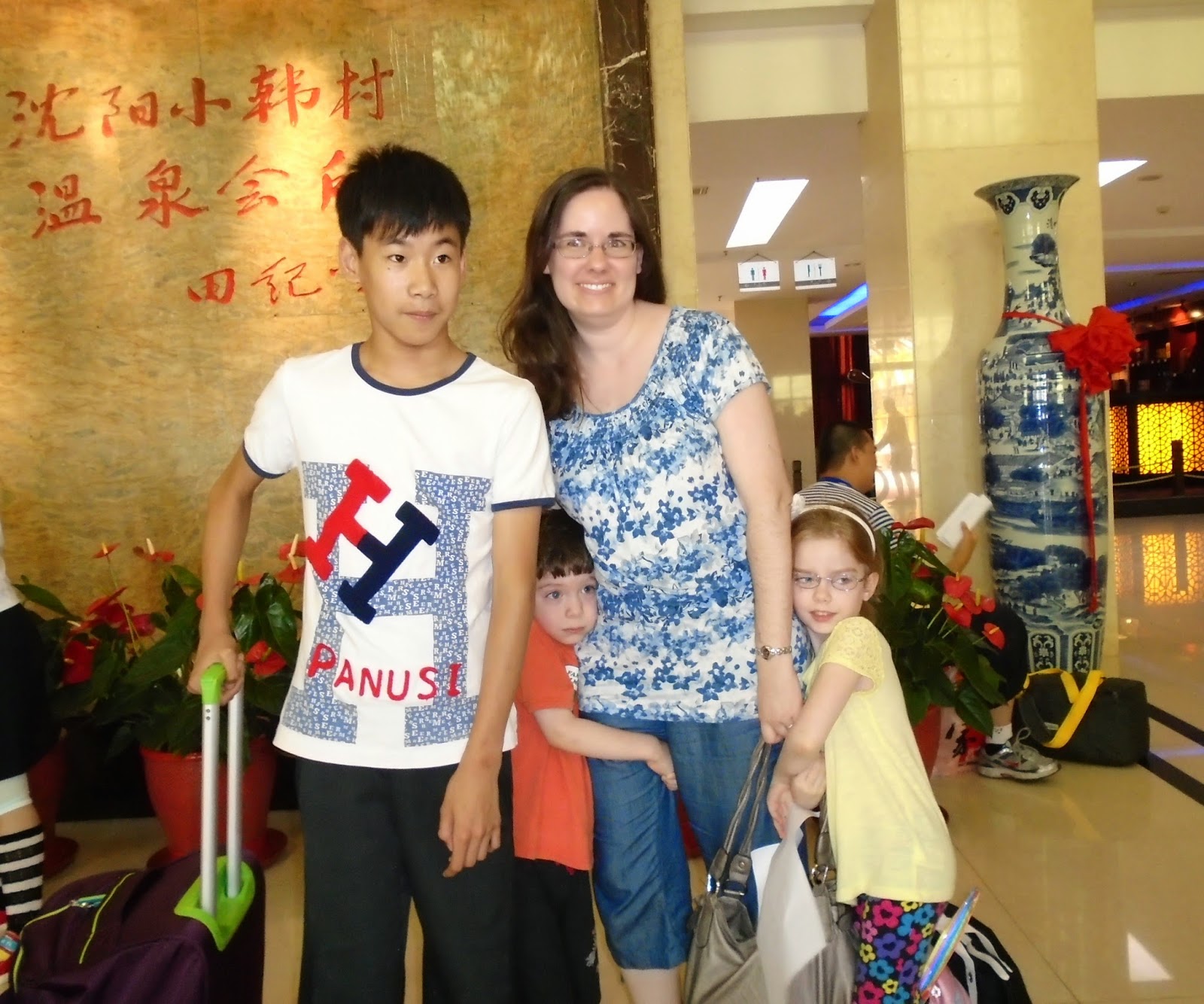 Let's contrast these two photos. Above: In the lobby shortly after our arrival when our friend Leo (who we know from our Saturday English classes) wanted to take a picture together. Hudson has a death grip on my leg. And below: In the lobby shortly before our departure on Monday with Nathaniel, the leader of the California team and our children's new best friend since he spent considerable time with them discussing VeggieTales. (This is Hudson's love language.) We all loved Nathaniel's enthusiasm! 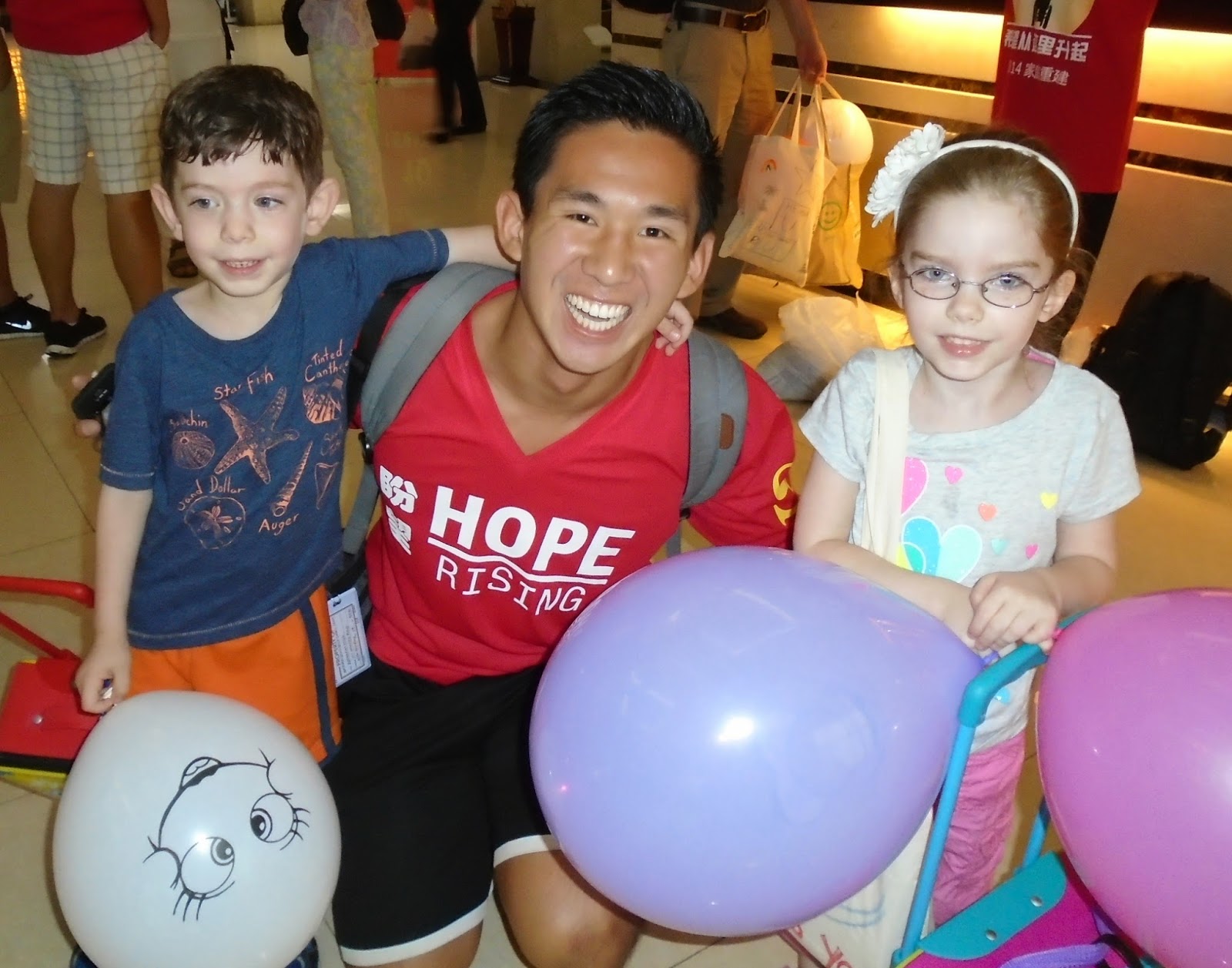 Clearly, our kids warmed up and had a great time. This is the third Family Retreat that Kevin has led since we've moved to China, but the first one the kids and I joined from start to finish. It was such a memorable and meaningful experience! The whole weekend had a close-knit feel, and joy was evident on faces all around. Children's activities were planned for each morning and afternoon while the parents/grandparents were attending health and wellness seminars, having one-on-one therapy consultations and discussion/support groups for encouragement. 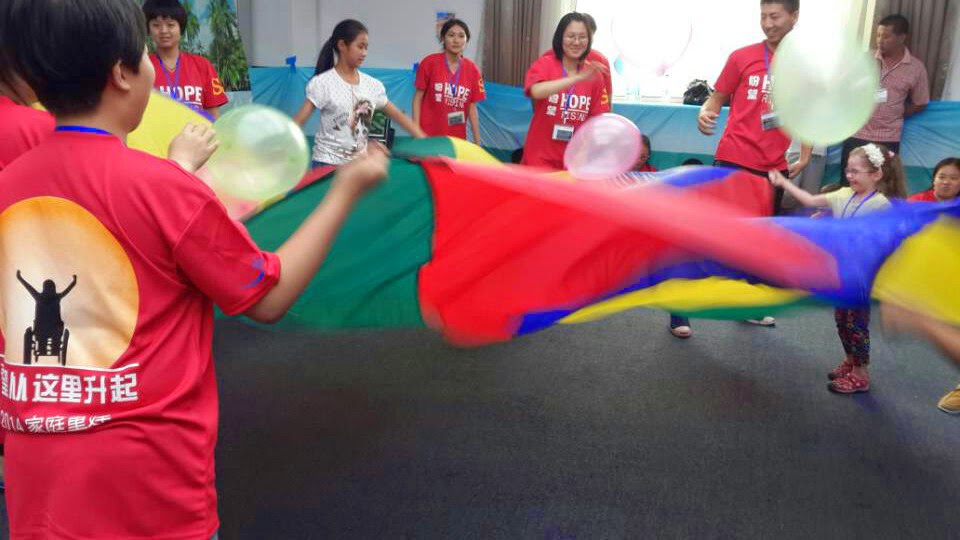 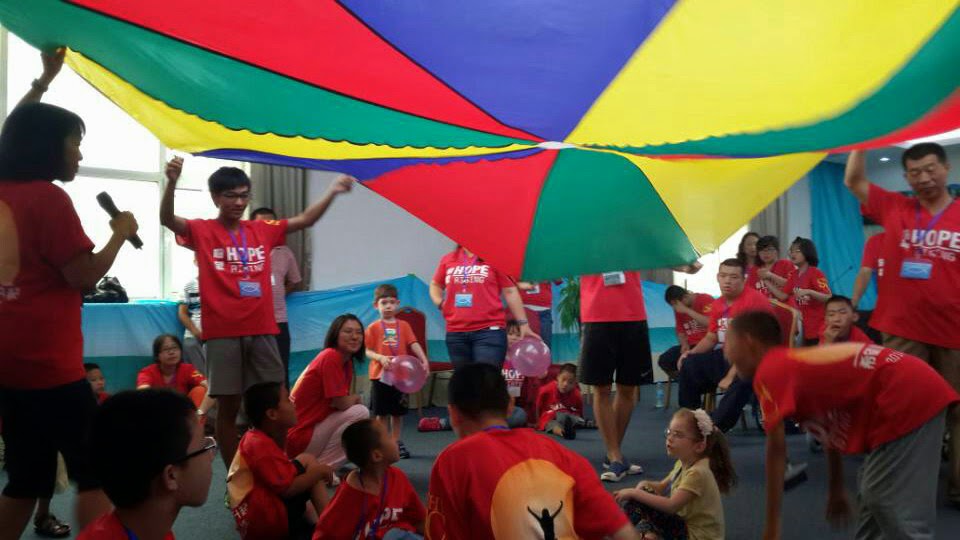 There was an island theme for the children's activities and songs. Even the adults learned the motions to  two songs and had fun dancing around between seminars. 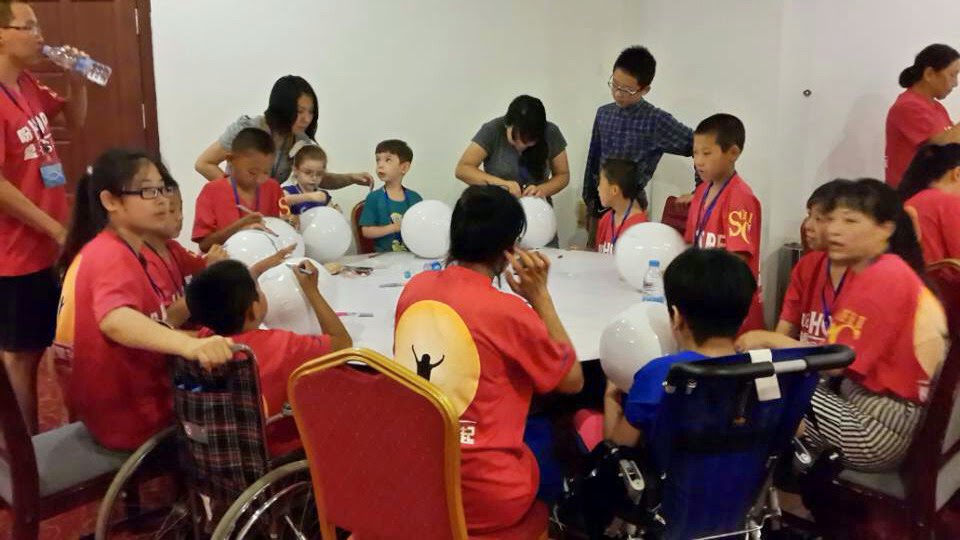 The kids decorated beach balls and many volunteers worked to fill more water balloons than you can imagine for some outside fun. 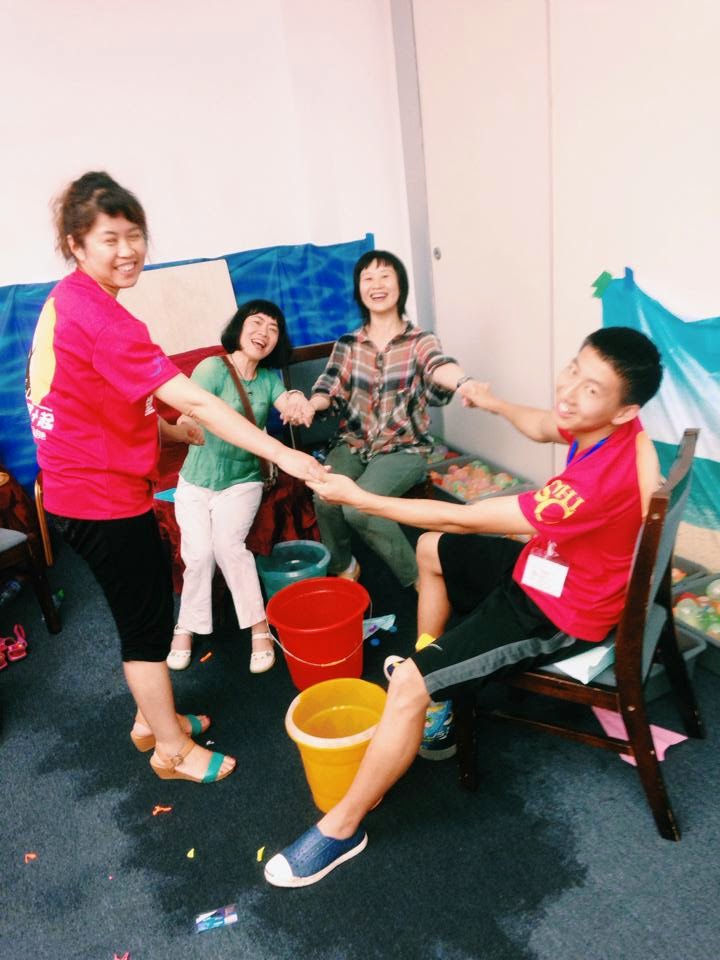 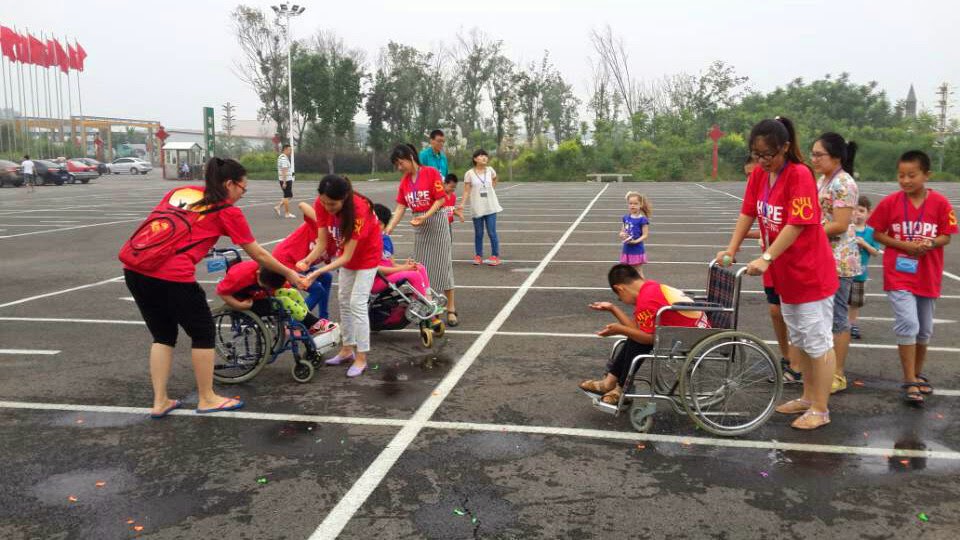 The crafts included making necklaces out of candy and beaded bracelets. 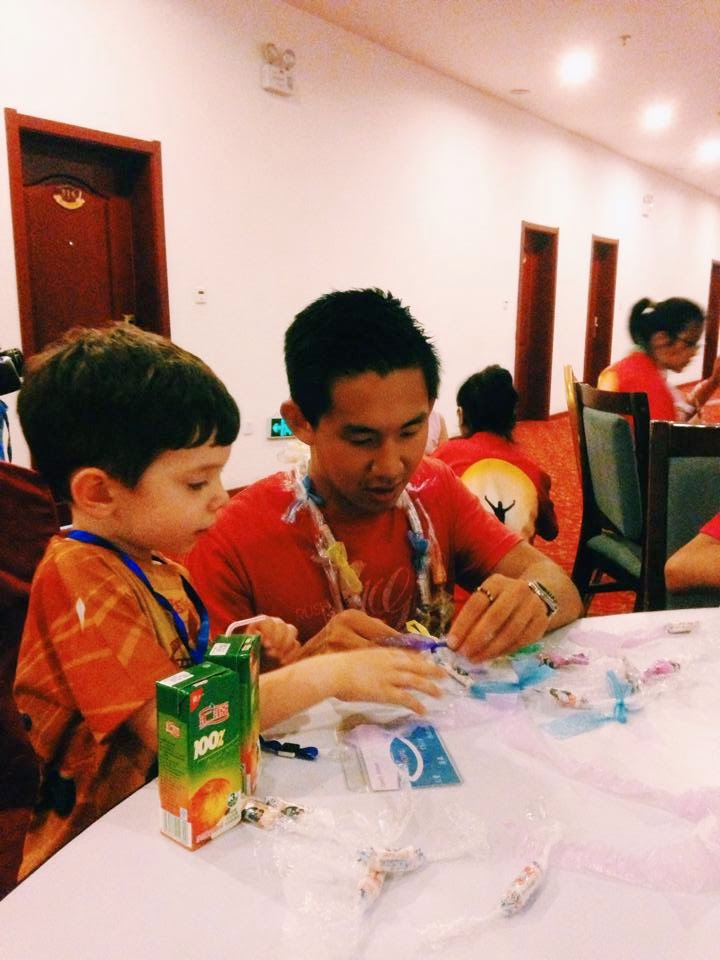 Since I knew the kids were well taken care of and having so much fun, it was easy to focus on my role as leader of one of the women's groups. From the very first session, I clearly saw how important this weekend was to the families involved. As the women met one another and simply began introducing themselves, you could sense their burdens lifting as they were finally around others who understood their daily challenges. 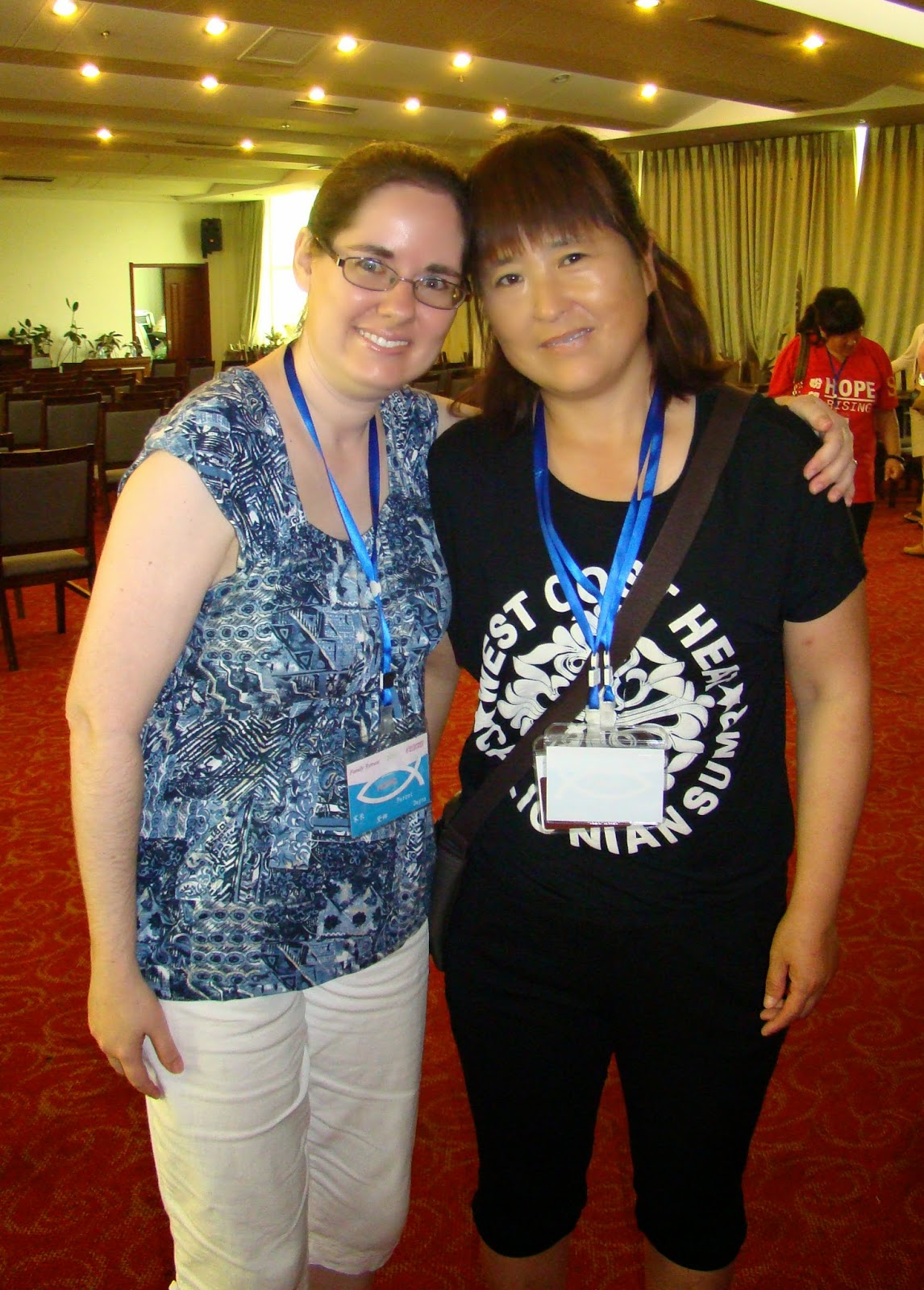 Each night after dinner, there was a special group activity. Friday night was the carnival, and it was a hit! Kids received stamps after playing each game (everything from bowling to bean bag toss to kicking a goal with a soccer ball) and could redeem them for a present from the prize table at the end. This isn't as common in Chinese culture as it is in America and everyone had such fun. Hudson woke up Saturday morning asking to do it all over again. (For their prizes, Hudson chose the monkey and Molly picked Snoopy.) 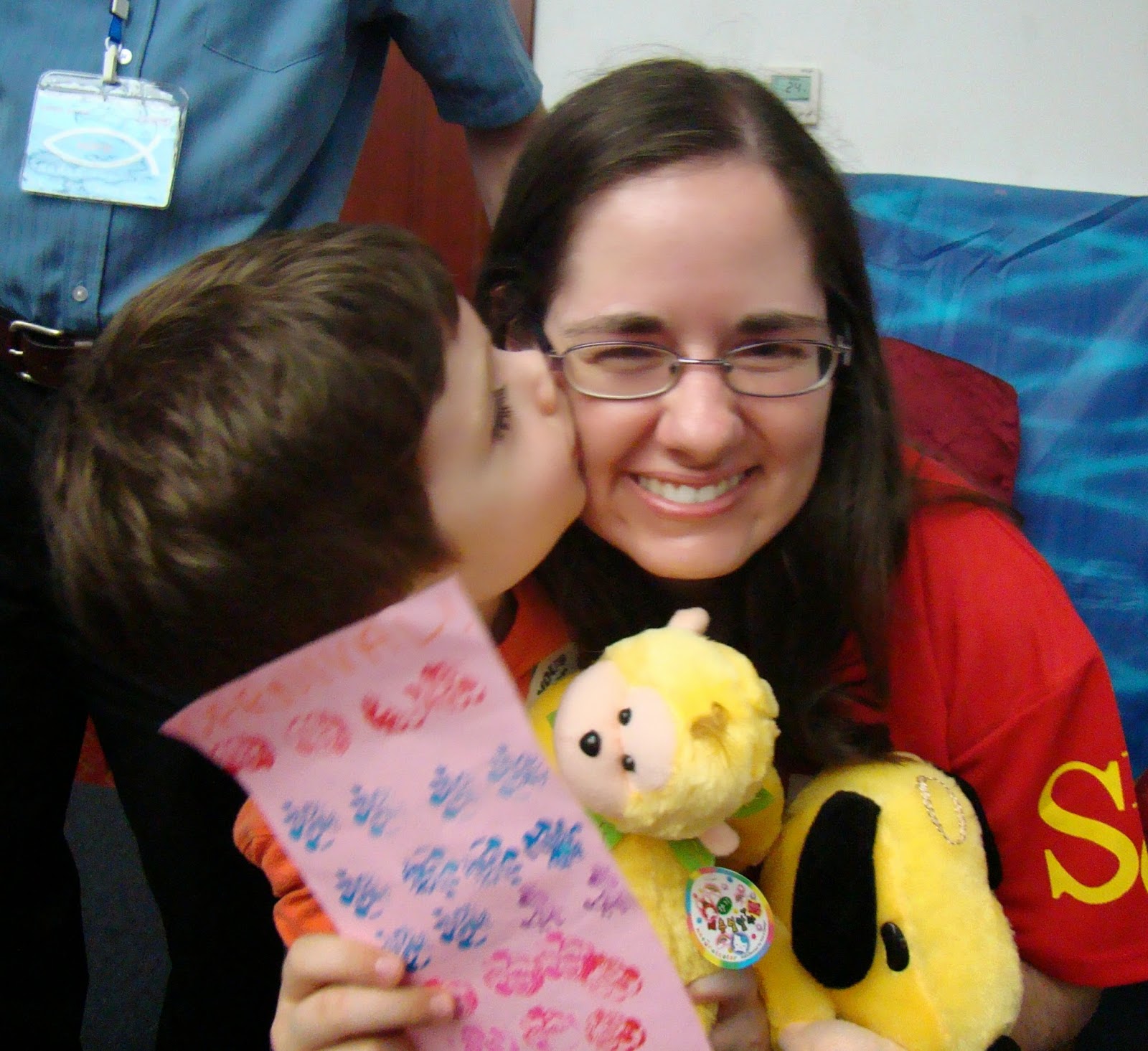 Saturday night featured four skits by the volunteers, plus Kevin had the chance to share about his personal story of hope. (Hope Rising was the overall theme for the retreat.) Sunday night was the big talent show and nearly all of the children participated by sharing a song. Leo sang and also played "Auld Lang Syne" on a type of Chinese flute, and another boy stood a coin on its edge and balanced a toothpick on top. A few of the kids worked together in a skit. Everyone felt like a star. 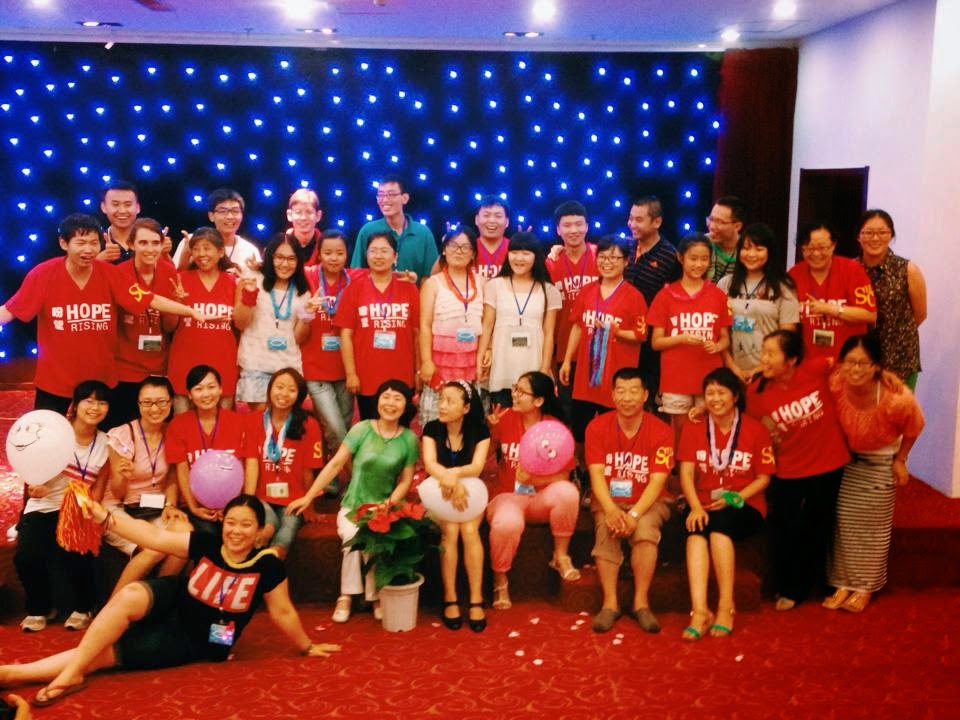 On Monday morning, we had a special closing ceremony. The volunteers made a "blessing tunnel" for each family to walk through one-by-one. We encouraged them along the way, and they received a gift at the end -- a decorated bag filled with notebooks, crayons, warm hats, balls. noisemakers, the Chinese version of Joni's book, and a photo and letter from the child in Texas who made the bag. It was a wonderful send-off, and there were more than a few tears from everyone involved. 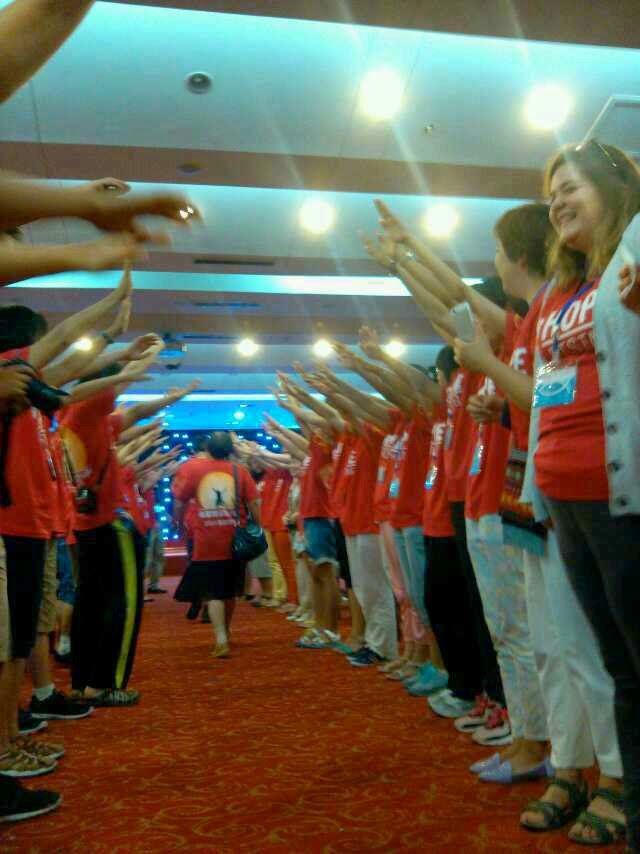 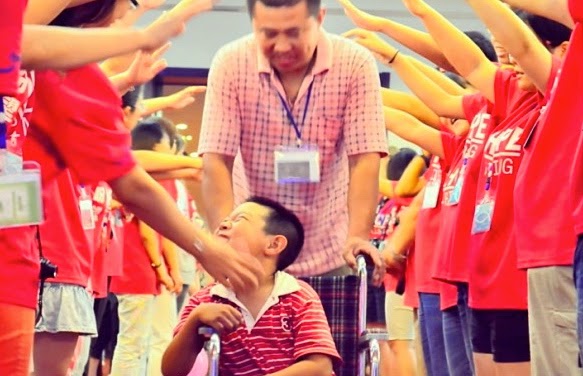 It is such an honor to be part of this work in China, and we appreciate the immeasurable support of people across the world who have joined us.
~Dayna
Posted by Dayna & Kevin, Molly & Hudson at 3:12 AM No comments: